Skip to content
by indrajit
Ideas Are Easy. Implementation Is Hard.

Are you looking for quick & cost-effective app development for your startup? but you’re not sure which technology to choose?

Native apps are more costly but they are still the best choice when it comes to user experience and performance. But nowadays Cross-platform apps are easy and quick to build, but it’ll take more effort to deliver an equivalent user experience on the respective platform.

Cross-platform apps are becoming more and more popular, which has increased the need for creating platforms to create them. There have been several solutions developed, but Flutter and React Native appear to be the most popular ones. Using the same codebase, both are created to function on iOS, Android, and maybe other platforms. It can be harder to choose between Flutter vs React Native. 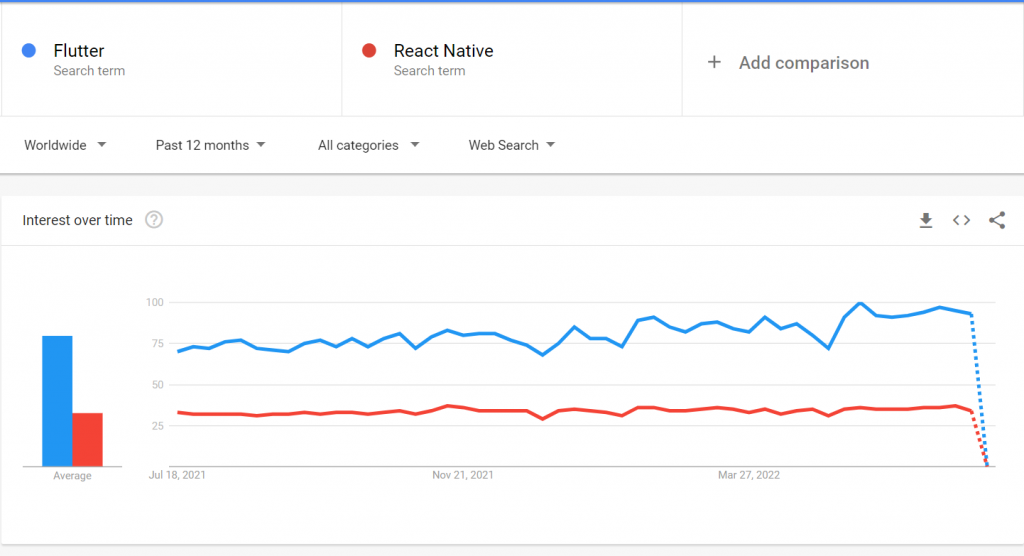 Why Is Hybrid App Useful For Startup Business Owners?

The latest research from Statista places Flutter as the leading cross-platform mobile development framework in 2021. Flutter surpasses React Native by 4% (42% for Flutter against 38% for React Native). Still, it's fair to say the two technologies are almost equally popular. 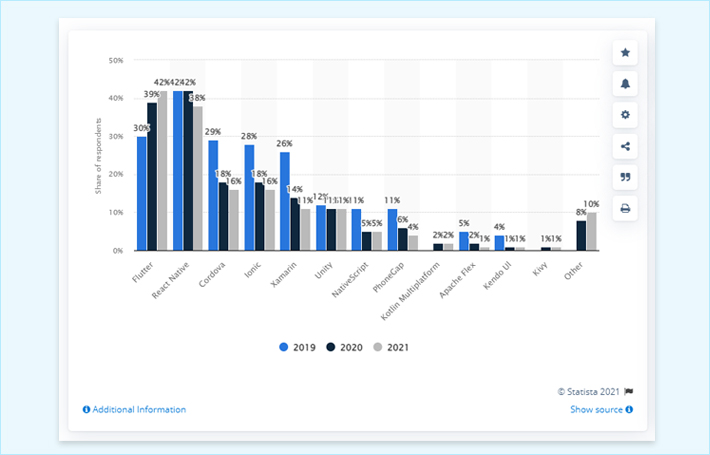 But what is the solution? Cross-platform mobile application solutions like Facebook’s React Native and Google’s Flutter. But which is better: Flutter or React Native? Let’s explore it.

What Is Flutter? - Overview

Flutter is an open-source, cross-platform mobile development framework that uses the Dart programming language. Google created Dart and Flutter and uses the framework for some of its biggest applications. Its initial alpha release was back in May 2017 but it's much younger than React Native.

What Is React Native - Overview

React Native was first developed as a Facebook internal sprint project in 2013 and released available to people in 2015.

Facebook's React Native is perhaps the world champion of cross-platform mobile development. A JavaScript framework built upon the React library, React Native helps you ship IOS and Android apps with a single code base.

The fact that Flutter is natively built to either ARM or x86 makes it faster than the competition when it comes to performance. Because React Native still uses the JavaScript layer and isn't compiled to native code, it performs slower than Flutter.

It uses the Dart framework which has most of the components inbuilt so it's bigger and often does not require the bridge to communicate with the native modules. The architecture of the Flutter engine is explained in detail in Github Wiki 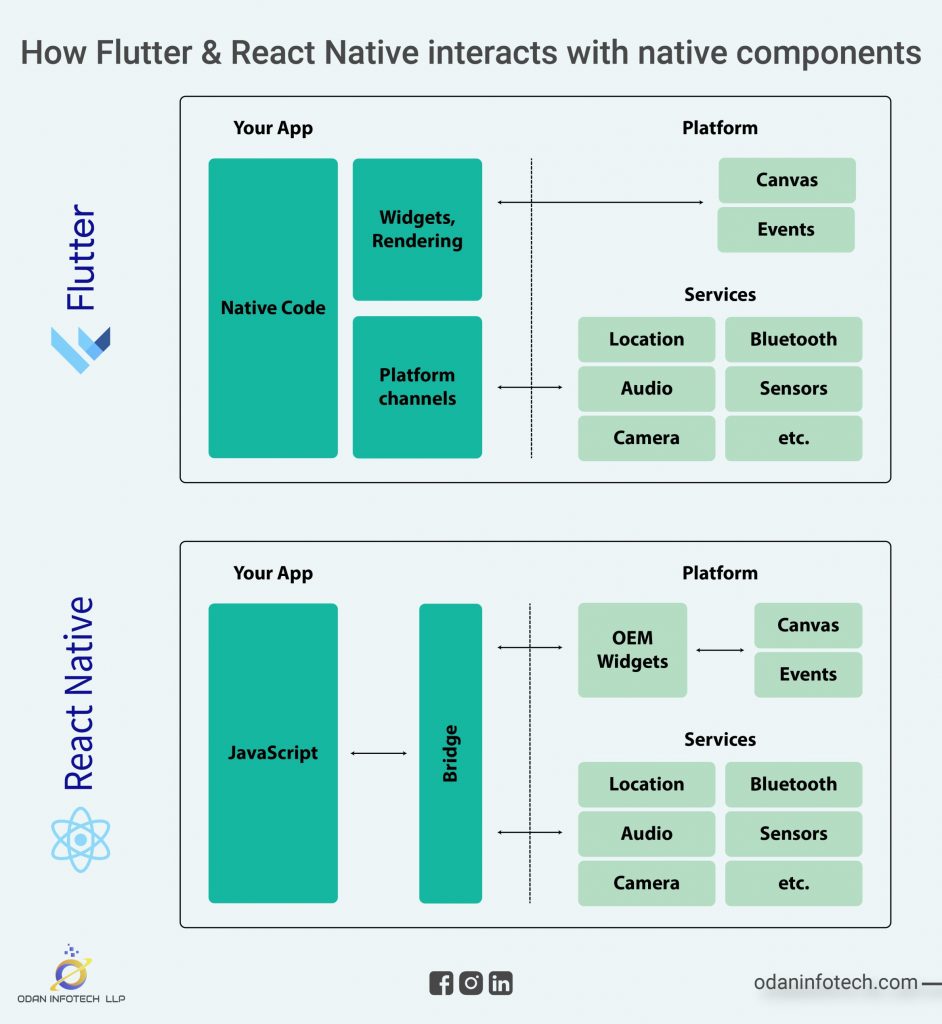 Flutter offers a rich user experience with simplified tools, elements, and even customized widgets. The generational garbage collection feature is also a part of Dart which helps in creating UI frames for objects that may be temporary.

It's difficult for React Native to keep up with the continual change in requirements for native platforms as iOS' Style Design and Android's Material Design evolve daily. Making consistent designs for different platforms is further complicated by ready-made React Native UI kits like React Virgin, Shoutem, and Ant Design. However, several essential elements, such as the ScrollView fixed header, Modal elements, Activity indicators, Snap carousels, and Pagination elements, significantly enhance the UX on many platforms.

Flutter is a cross-platform development tool for Android and iOS apps. It offers extensive support for testing apps at the unit, widget, and integration levels. Flutter also boasts of detailed documentation to build and release apps on the Play Store and App Store.

React Native has no official support for UI level testing and Integration testing. It is still relying on third-party libraries for build and release automation. The entire framework doesn't offer any automated steps to deploy the iOS apps to App Store. RN suggests developers define the manual process of deploying the app through Xcode.

Community Around: Flutter Vs React Native 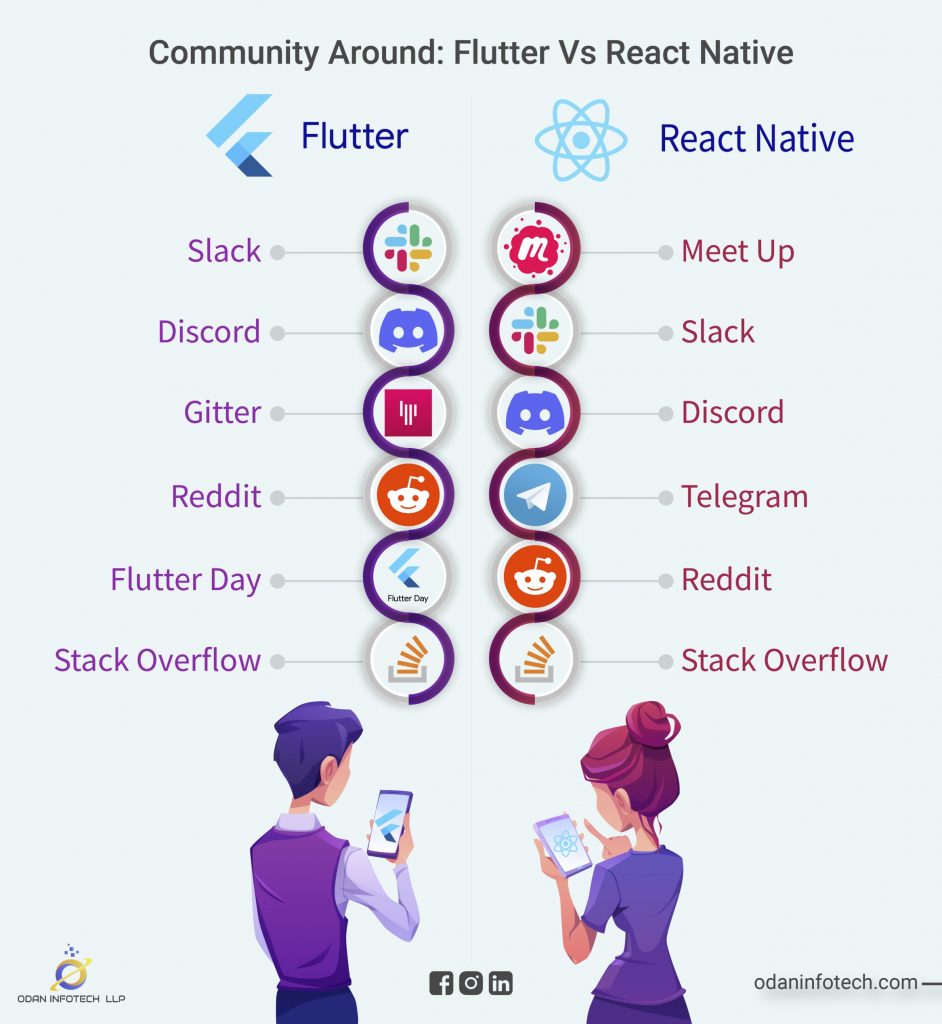 With its pub package structure, Flutter provides improved accessibility for a diverse team as well as the partitioning of project codes into several modules. With the flexibility to connect to other modules, your team can quickly add or modify a codebase. The BMW architects described how they made it possible for several teams with various skill sets to collaborate with Flutter with ease at the Droidcon NYC conference in 2019.

React Native could provide less support for modularity when compared to Flutter. It could be challenging for Reactjs, iOS, and Android developers to communicate with one another. The code fragmentation in React Native may cause problems for various teams without knowledge. React Native, on the other hand, provides the opportunity for developers from other teams to partially collaborate by combining straightforward native components from several OS platforms.

Flutter is not difficult to learn. While writing code in Dart may seem weird, this is what makes creating Flutter applications simpler. All a beginner needs to master this framework is a foundational understanding of native Android or iOS coding. Additionally, developers claim that Flutter documentation runs far more smoothly than React Native documentation.

For those who have developed applications using JavaScript, learning React Native is surprisingly easy. However, web development is distinct from the creation of mobile apps, which is why it can be challenging for mobile developers to understand and use the framework. The learning curve has been lowered by the numerous libraries, in-depth docs, and tutorials that React Native has released over time.

In Flutter, The time taken for releasing quality updates and making immediate changes in the application is considered to be better than the hot reloading capacity of React Native. The simplicity of code helps developers spot issues, source external tools, and support third-party libraries. Furthermore, the stateful Hot Reloading feature immediately resolves issues.

In React Native, upgrading and debugging the code is a pain. When you fork the code to suit your application, it interferes with the framework's logic. Most of the native components might have a third-party library dependency. Often these libraries are outdated and cannot be maintained properly.

Use Cases Of Flutter And React Native 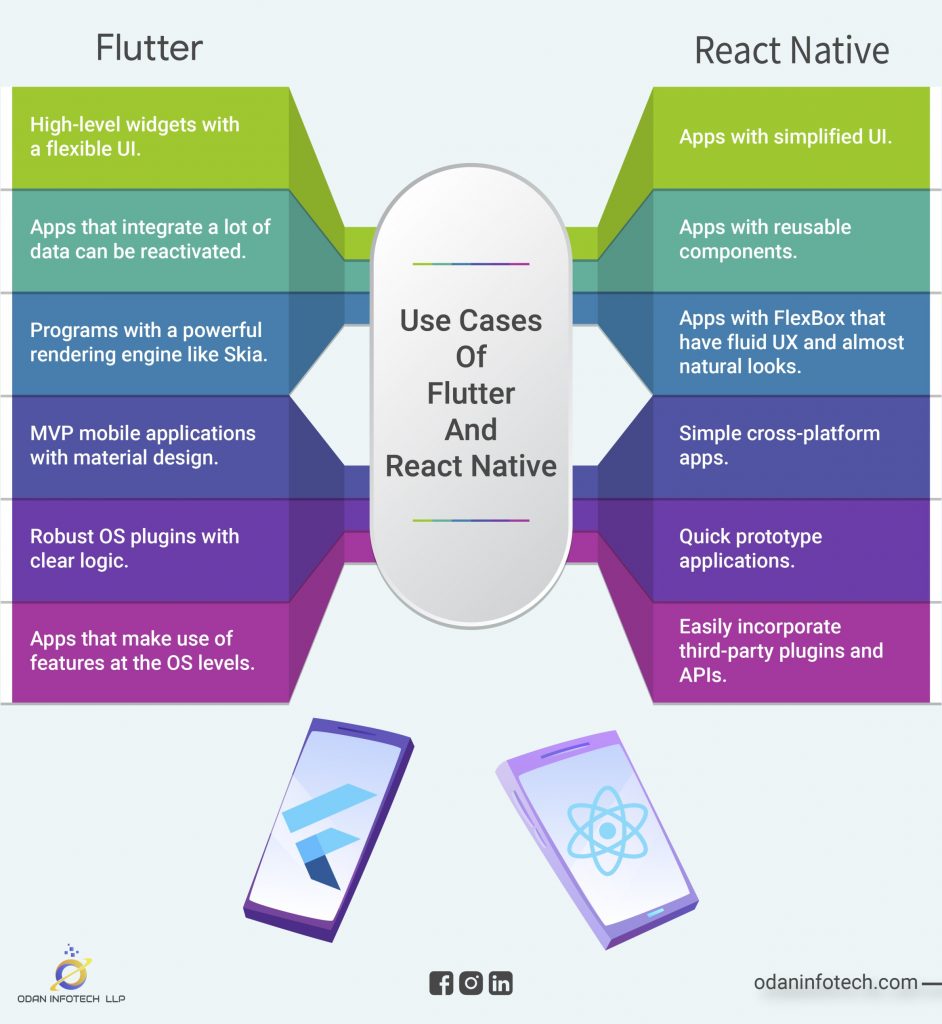 Famous Apps Made With 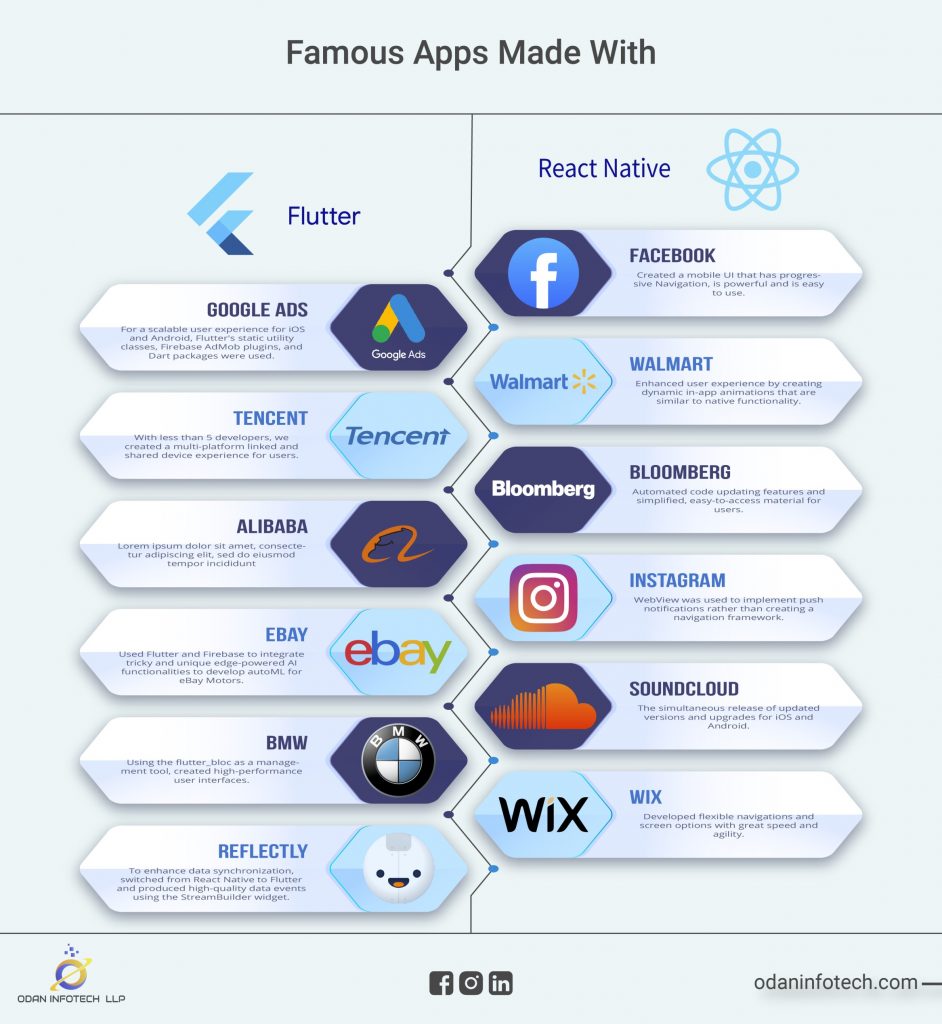 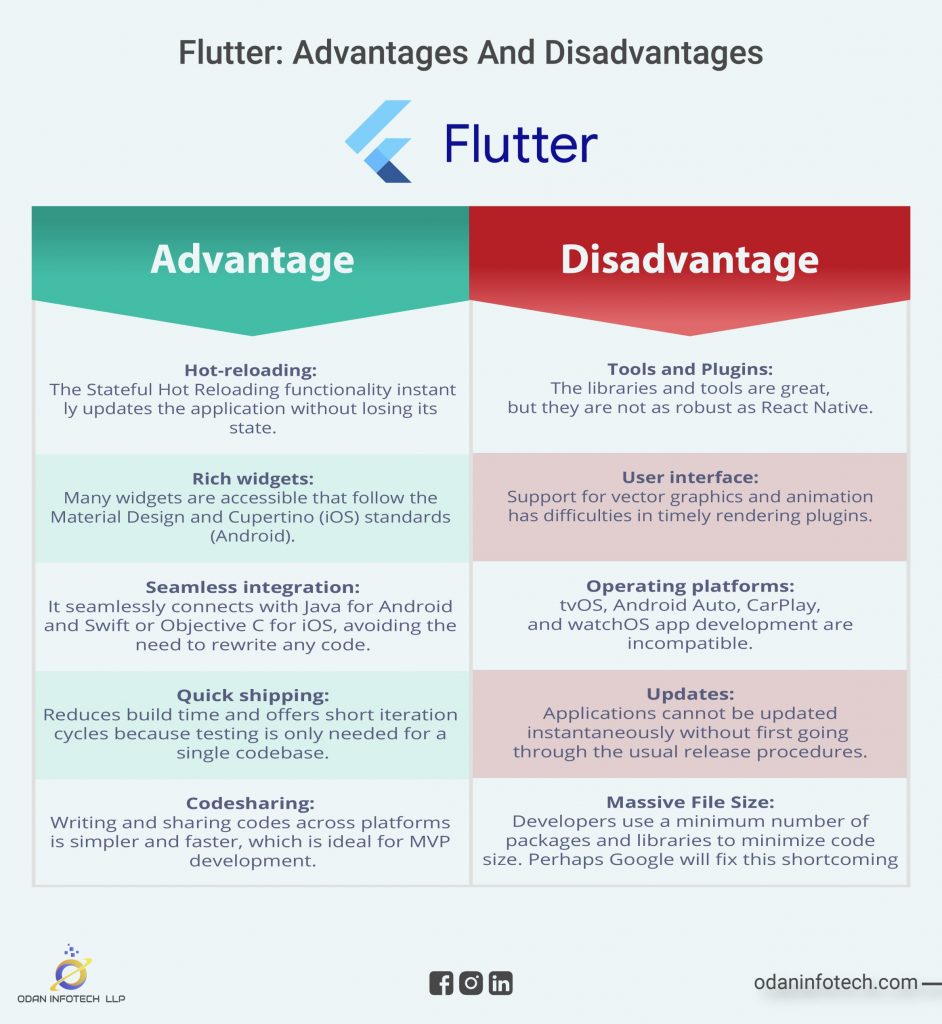 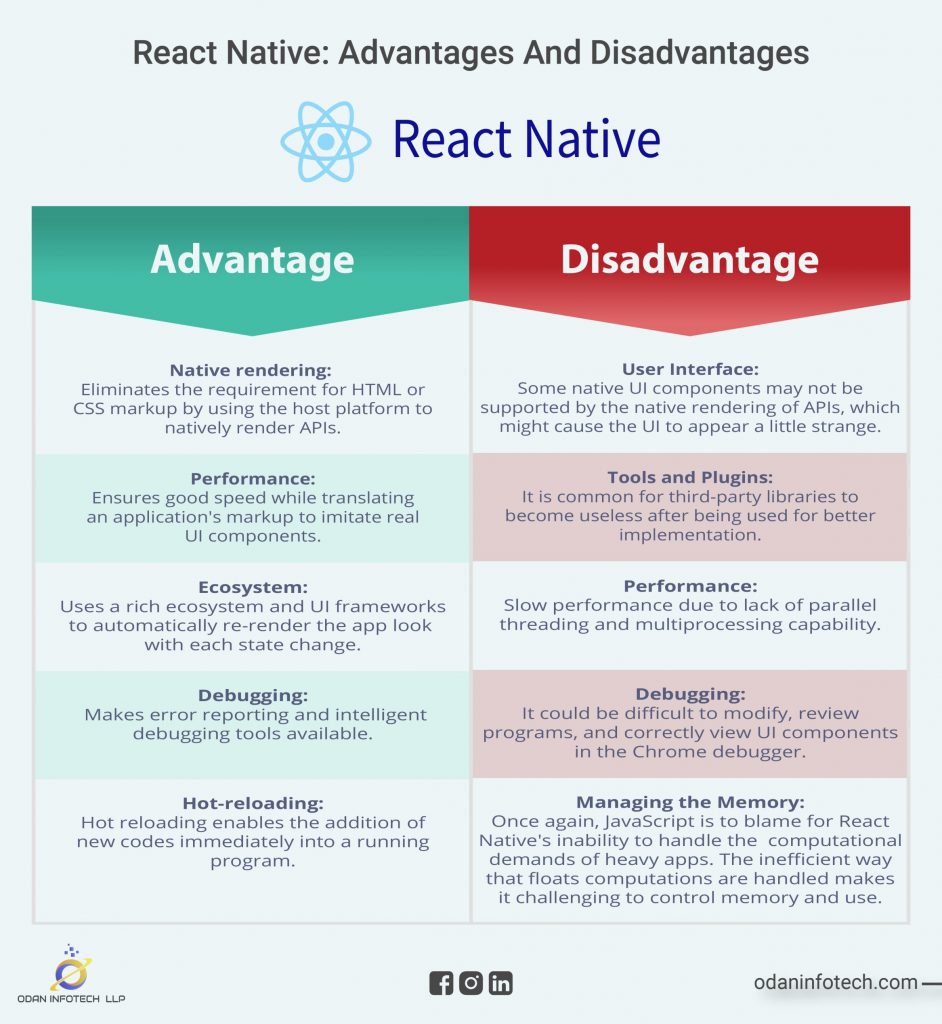 When To Choose Flutter?

When To Choose React Native

The various iterations and MVP apps that Flutter produces are excellent. A nice framework for creating straightforward native and cross-platform apps in React Native. We've put together criteria to help you make the decision on which of these technologies should be added to your IT stack.